27 highlights of Moscow and St. Petersburg

Russia’s Coat of Arms bears a double-headed eagle, whose first head looks to the west, while the other looks to the east.  This reflects Russia’s everlasting dual identity and a question the Russian people face constantly: “Which way to go?” Is the future of Russia to Europe or to the East, both in Moscow and St. Petersburg?

This duality naturally enriches the cultural and creative wealth of the country. Visitors can see for themselves the distinct differences between the ideologies, local mentality, and approaches to art and architecture in these two important Russian cities.

I wouldn’t dare to rate and rank these magnificent historical, architectural and cultural sites. So I’ve listed the following 27 highlights of Moscow and Saint Petersburg in geographical sequence:

The Heart of Moscow

Exploring Russia begins, of course, at the heart – the #1 Red Square in Moscow. The domes of the colorful #2 St. Basil Cathedral, an outstanding masterpiece of Russian Orthodox architecture, are reminiscent of flames rising to the sky. Despite the collapse of the communist system, #3 Vladimir Lenin’s mausoleum still remains on the Red Square.

#4 Kremlin – the former residence of Russian Tsars and today’s office of the president of Russian Federation is open for the visits to its museums. Guests can visit the fabulous #5 Armory Museum and the Palace of Facets, both home to priceless Imperial Treasures of Russia.

One of the main cultural values in Moscow is the #6 State Tretyakov Gallery, an art museum housing the greatest collection of Russian national fine art in the world. It contains over 130.000 exhibits, ranging from the icons of Andrey Rubliov to modern masterpieces by Wassily Kandinsky and Kazimir Malevich.

Tourists regularly flock to the famous #7 Novodevichy cemetery, the most prestigious resting place for great writers, poets, composers, artists and politicians, among them Chekhov, Gogol, Bulgakov, Mayakovsky, Prokofiev, Shostakovich, Khrushchev, Yeltsin, and others.

Drive to #8 Sergiev Posad to visit one of the holiest places of Russia, the stunning Holy Trinity St. Sergius Lavra, founded by St. Sergey Radoniezhsky in the 14th century. For centuries, this monastery has been one of the main pilgrimage sites for believers of Russian Orthodox. Use your free time in Moscow strolling along the famous pedestrian street #9 Arbat with its variety of handiworks, coffee shops, and street artists.

You cannot miss the high-rise buildings at the corners of the Soviet five-pointed star, a vivid example of the Stalinist “Empire” style architecture. Another symbol of so-called Socialist Realism is the #10 Moscow Metro, its stations decorated in the style of 30’s-50’s.

In the evening visit another pride of Russia – #11 Bolshoi Theatre, to enjoy the famous Russian ballet performance.

Explore the canals and avenues of St. Petersburg, also called the “Venice of the North.” Wander the grounds of the #12 Peter and Paul Fortress built by Peter the Great in 1703. The Spire of the Fortress Cathedral, towering 122.5 m, has become a symbol of St. Petersburg. 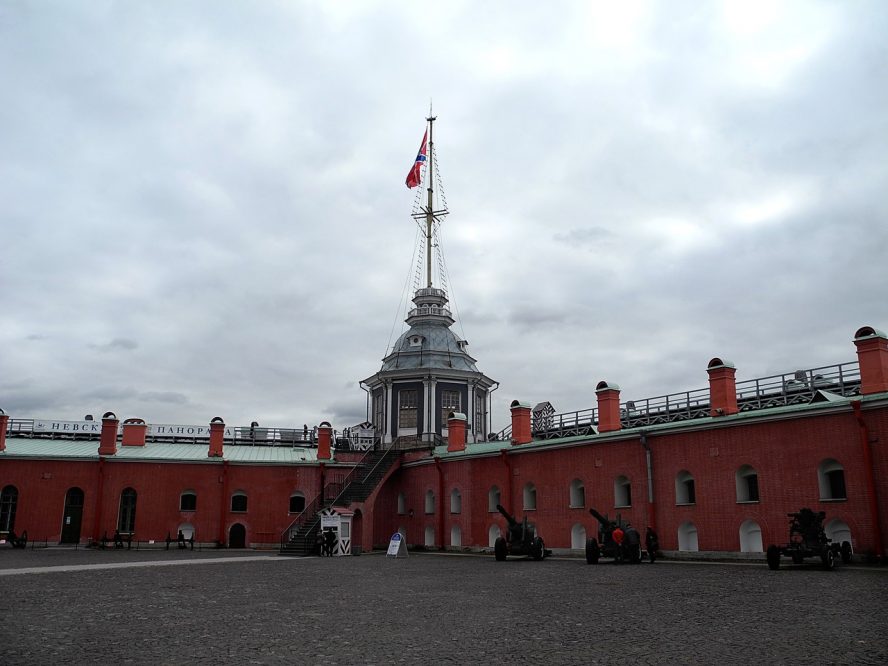 The crypts of all Russian tsars after Peter the Great in Petropavlovskaya Cathedral tell the history of Russian Empire throughout 200 years. #13 Vassilyevsky Island, its layout designed by Tsar Peter himself, houses the first University in Russia, the Academy of the Fine Arts, and #14 “Kunstkamera” – the first museum in Russia.

Finally, drop by #18 Yusupov Palace that once belonged to one of the wealthiest noble families in Russia. Today, it houses a museum detailing the life of 19-20 c. Russian nobility and tells the mysterious story of Rasputin’s murder.

#19 Peterhof Palace and Gardens Ensemble is one of Russia’s UNESCO World Heritage sites. Stroll the magnificent complexes of the Grand Palace, sometimes dubbed the “Russian Versailles,” as well as the Monplaisir and Marly palaces. Don’t forget the Great Cascade of gorgeous fountains and gilded statues, which attract thousands of tourists each year.

#20 Saint Isaac’s Cathedral is the fourth largest domed cathedral in the world. The interior is richly decorated with paintings from many leading Russian artists. The mosaics are so artful one can hardly tell them from a painting. Fourteen different colors of Italian marble were used for the ornamentation.

Visit the #21 Smolny Convent of the Resurrection. The stunning blue and white Cathedral is an architectural masterpiece by renowned Italian architect F.B.Rastrelli. Rastrelli was the mastermind behind many of St. Petersburg’s monuments, including the Winter Palace.

#22 Alexander Nevsky Lavra (resting place). This complex contains a monastery and two cemeteries, that hold the remains of many notable Russian cultural figures. Their gravestones are pieces of art themselves. Pay tribute to Dostoyevsky and Tchaikovsky; fellow composers Rimsky-Korsakov, Glinka, and Mussorgsky; founder of Russia’s first university Mikhail Lomonosov and mathematician Leonhard Euler, architects Quarenghi, Rossi and Voronikhin and many others.

#23 Winter Palace is home to one of the world’s greatest art museums, The Hermitage. Spend few hours admiring the masterpieces of Leonardo, Michelangelo, Rembrandt, Rubens, Titian, El Greco, Velázquez, Monet, Renoir Van Gogh, Gauguin, Matisse and many, many others.

Off the Beaten Path

Visit the famous #24 Mariinsky Theatre to enjoy its musical performances, or drop by the #25 brand-new Fabergé eggs’ museum. Next, will be the extremely colorful #26 “Church of Our Savoir on the Spilt Blood” – a memorial church, built on the spot where Tsar Alexander II was assassinated in 1881. Finish your stay in St.Petersburg with a memorable #27 cruise along the rivers and numerous canals of the area.

In the next posts, I am going to detail some of the most interesting and exciting experiences of this route.

You can find above mentions places in one of these tours: