What small towns are worth visiting in the Baltic states?

What small towns are worth visiting in the Baltic states?

From Vilna Gaon’s Kėdainiai to elegant Cesis, here are 21 of the loveliest small towns in the Baltics. Discover more towns on our Baltic Trilogy Tour.

In this article, I am going to discuss a few reasons why it is worth visiting these small towns.

To begin with, Palanga is about sandy beaches and dunes, sea bridge, fresh iodine filled air, botanical garden and an amber museum in it. In addition to that, it’s about numerous cafes and restaurants with tasty food, such as beet soup with sour cream. Therefore, Palanga is a good place to explore Baltic cuisine.

Anykščiai is a town famous in Lithuania for its boulder. According to the scientists, the “stone” was brought here by glaciers between 14000 to 20000 years ago. It is the main landmark in the town. Above all, the sculptor Bronius Pundzius engraved in the stone faces and the last will of Lithuanian pilots who crossed the Atlantic ocean on their plane “Lituanica”.

Certainly, Druskininkai is a well-known spa town in the very southern tip of Lithuania. The name of the town implies this, as druska means “salt”. It was first mentioned at the end of the 16th century, popular in the Soviet Union. Pine forests are, literally, in the town. The river is there. It was a popular Sanatoria spot during Soviet times and transformed into a spa town in modern times. A good idea is a day tour to Grodno, which is right on the other side of the border

Birštonas is a true balneological resort located within the boundaries of a Nemunas Loop Regional Park. It is known for its mineral waters. It was mentioned already in the 14th century as a place of “salty waters”. River Nemunas makes a loop around the town so there is a feeling of being around the water. Most importantly, Birstonas is not far from the capital of Lithuania Vilnius and at the same time from Kaunas.

To begin with, Raudondvaris lies on the Nevėžis River, just 10 kilometers from Kaunas Raudondvaris boasts a beautiful basilica of St. Theresa, museum, parks, and iconic tombstones from the powerful Tyszkiewicz family.

To continue with, Raudondvaris is also home to an elegant Manor Castle and accompanying gardens, stables, and orangery. The powerful Radziwiłł family built it in the year 1615, the palace was once known for its fine arts collection, which included paintings by Da Vinci, Caravaggio, Rubens, and others.

Kėdainiai is a charming town that maintains much of its old atmosphere from the 17th century. Its rich Jewish heritage is still evident in remnants of synagogues and a Jewish cemetery. Kėdainiai is relatively close to a Kaunas airport. For some reason, it’s often overlooked by tourists–but not by Jerulita Travel. On our tour through Lithuania, we introduce you to the town’s beautiful market square and the wooden St. Juozapo Church.

A favorite spot for many beachgoers and summer vacationers, Nida is one of the most idyllic towns along the Curonian Spit. With its thick forests, an impressive stretch of sand dunes, and a stunning lagoon, Nida makes for a perfect summer getaway.

Moreover, Nida as the whole Neringa is Unesco world heritage place. Neringa is a unique region within Lithuania. A good idea for a day tour from Nida is to cross the border and visit a Russian part of a Curonian Spit. 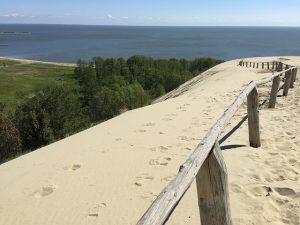 Daugavpils is the second largest city in Latvia after Ryga. Historically, on a railway crossroad between Warsaw and St. Petersburg, as well as Ryga and Minsk.

There is a Daugavpils fortress. The Russian Tsar Alexander I decided to build it in 1810, anticipating Napoleon’s invasion. Last but not least, the city boasts multicultural history, as the city had a significant population of Jews, Belarussians, Russians, and Poles.

West of Riga is Sabile, a small town that boasts to be the northernmost outdoor vineyard in the world. This is recorded in the Guinness Book of Records. Due to the southward facing slopes, vineyards became a reality here. Sabile’s wine traditions started yet in the 16th century. If you’re lucky enough to visit in July, be sure to stop by the annual Wine Festival.

It is also the place where you’ll find the Open-Air Museum at Pedale Manor, created by famed Latvian sculptor Ojars Feldbergs.

The westernmost Latvian city on the Baltic sea boasts sandy beaches. It is the 3rd largest city in the country and provides a truly Baltic experience. There are many churches museums and other monuments, Art Nouveau buildings. Because there were many industrial sites during Soviet times, there is loads of Soviet architecture as well. Nowadays, known for its coffee and beer brewery.

One of the easternmost towns not only in Latvia but the European Union in general, a heart of a historical Latgale region with its own language dialect. It is an important stop on a railway between Ryga and Moscow. You could still find many wooden houses in the town, such as a Green Synagogue and St.Nicholas Old-Believers Church. Latgales Mara is one of the most known statues in the whole Latvia.

In addition, Raznas National park with its stunning nature and lakes is close to the town.

Full of fascinating historical sites, castle and natural wonders, Cesis is a must-see for any visitor to Latvia. You could easily spend a whole day touring the regions outdoors. In the town, medieval remnants abound, from the 13th-century St. John’s Church to the ruins of Cesis Castle, once held by the Livonian Order and now home to the Cesis History Museum. Above all, Cesis is located in the very middle of the Gauja National Park.

Ludza is Latvia’s oldest known town, mentioned as far back as the 10th century. The once-great Ludza Castle was the far eastern outpost of the Livonian Border and served as a crossroads and trading post. After the dissolution of a Livonian Order, it became part of a Polish-Lithuanian Commonwealth. Most importantly, Ludza History Museum and its open-air exposition invite to learn the history of the region.

The small town of Alatskivi is something out a fairytale, with the fine Gothic Alatskivi Castle. You’ll also find the romantic Alatskivi Lake in the town, which makes a cozy natural setting. What is more, Lake Peipus, the fifth largest in all of Europe is within a walking or cycling distance from the town.

The small town of Keila is easily overlooked by visitors, but the ancient village has been in the northwestern corner of Latvia ever since the 10th century. Nature lovers might find wonders in the million-year-old limestone, the Keila River, and the marvelous waterfalls that simply shouldn’t be missed.

Quiet and peaceful Saaremaa Island is one of the most beloved regions in all of Estonia. Here, the city of Kuressaare, which is a “capital city” of the island is home to Kuressaare Castle, erected in 1380 and now home to one of the largest and most popular museums in the country.

Folk has spoken of the healing seawaters of Haapsalu for hundreds of years. This quiet town avoids the bustle of many resort towns yet retains its charming, pleasant atmosphere. The area is also home to a picturesque castle and old town, which makes for a very photogenic weekend getaway. Most importantly, the town is famous since the times of the Russian Empire due to its muds. Mud spas are still operating..

To continue with, a small but ancient town in Estonia. The castle dates back to the 13th century.Viljandi is on the shore of the picturesque Lake Viljandi. A popular attraction is exploring the lake on the boat or kayaking. In addition, Viljandi Folk Music Festival takes place each July.  Last but not least, Hanseatic days remind once powerful commercial, trade, and defensive union of the northern European towns. Symbolically, visitors can buy and sell traditional goods during Hanseatic days.

Narva is a town in eastern Estonia. Firstly, The Danes founded the castle. Secondly, it was a place of fierce battles between Swedes and Russians. As a result, the most prominent landmark in the town is Hermann castle, also called Narva fortress, which is a must visit the place. After that, Narva Joesuu, a seaside resort on the Gulf of Finland, is perfect for a day trip.

Last but not least, Palmse is known for the Palmse manor. It is within an hour drive reach from the Estonian capital. Besides the manor, there are nice surroundings as the town is located in the Laheemaa National Park.

In conclusion, there are many small towns in the Baltic countries. Nature lovers will find forests full of wild berries, as well as lakes and rivers, with endless recreational possibilities, such as bathing, kayaking. People interested in architecture will find numerous castles, fortresses, wooden houses