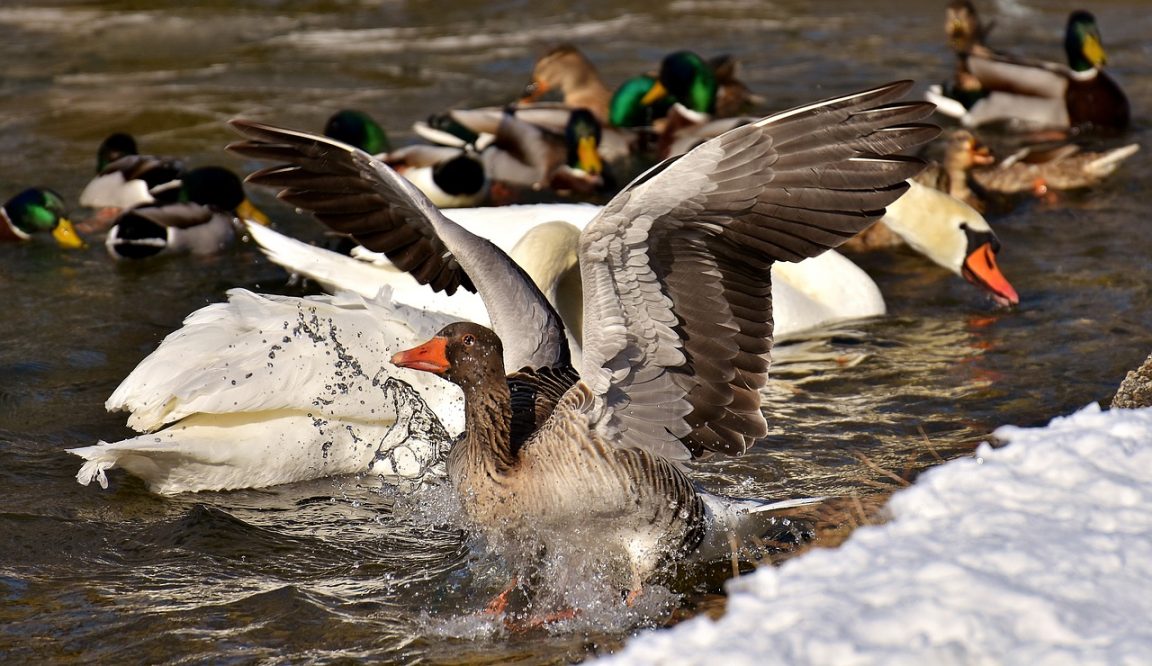 As soon as Lithuanians swallow the last pancakes baked on Shrove Tuesday, they breathe a sigh of relief. “Finally! The damned winter is ending.” Here at JeruLita, some of us start to pull out the equipment for the first and most exciting (IMHO) tour of the year: Spring Bird Watching.

Of course, Winter isn’t going to vanish immediately, but it will pass in just a month or two maximum. Many birds that migrate between Europe and Africa each year choose to fly via Lithuania. Some of them will opt to stay and breed here; others will just pass through, bringing us the message that Spring is coming.

Growing up in Lithuania, we tend to take for granted the number of birds that we’re privileged to see in our forests and parks. But as soon as we talk with foreign visitors, who express astonishment at our bird population, we start to pay attention to our avian world.

I remember how it happened to me. I was accompanying a lovely family from Indiana. They were in Lithuania to track down the graves of their ancestors. After visiting their family’s village–in the middle of nowhere–they suddenly remarked on how they finally understood why their grandfather chose Indiana as his new home.

Not warm Florida or bustling New York, not maritime Maine or expansive Texas, but Indiana — with its endless fields. Indiana reminded the nostalgic emigrant of his motherland, Lithuania. We began to catalog the similarities of nature between the two places: the same flat landscape, the same mixed forests the same mushrooms (they simply don’t eat them) … when suddenly somebody shouted: “Stork! Stork! I saw a stork! Stop the bus, it was a stork!!”

“Big deal,” I thought to myself…

But to my American guests, storks were symbols of a forgotten past.

Come summertime in Lithuania, it is quite difficult to find a place without storks, than vice versa. For ages, local peasants believed that the white stork on the roof symbolized peace and happiness. Farmers even strive to make their homes attractive to these slender birds, as each white stork guarantees “Wealth, Health & Babies” to the home on which they build their nest.

Their elegant wings managed to transport my American guests from the bustling 21st century to the atmosphere of the Shtetl of eighty years ago. Suddenly, it became so easy to imagine a tranquil Shabbat evening, Jewish men reading the Talmud, their wives discussing the latest news from the town, their children playing at the market square or on the banks of the river, and those same storks, pacing with dignity in the fields…

After a long, productive day, I came back home and read all I could about the white stork (Ciconia ciconia). To my enormous surprise, I discovered that the population of White Storks in Lithuania (“Baltasis gandras”) was the largest in Europe. And that’s how my interest in bird-watching was born.

At this time of the year, migrating birds can be seen in significant numbers everywhere, even in Lithuanian cities. City tours tend to focus on history and architecture, not nature, which is why, if you are seriously interested in bird-watching, you are welcome to join JeruLita Spring Bird watching tour.